A bespoke scheme set up by Avon and Somerset Police to help safeguard people living with dementia is now into its seventh year.

The Avon and Somerset Dementia Safeguarding Scheme was established in 2015 by sgt. Stuart King in response to an increasing number of missing person and welfare concern reports involving people living with Dementia.

Around 40,000 people with dementia go missing for the first time in the UK every year.

The scheme, also known as the Herbert Protocol, enables families to upload vital information about their loved one via our website, which can be quickly accessed by the police should the need arise to conduct a missing person search.

Thanks to charitable funding, free ‘wearable tech’ wristbands are now also available through the scheme. The wristbands store this vital information, which can then be retrieved by emergency services, health professionals or members of the public using a smartphone, to help return the wearer to safety if they are found lost or in need of assistance. 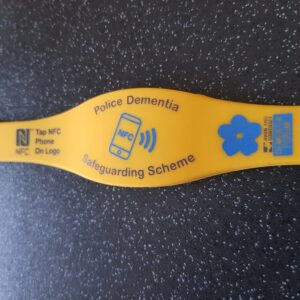 The wristbands have since been adopted a number of police forces nationwide and the scheme has even received international interest.

Learn more about how the NFC wristband works.

Sgt. King runs the Dementia Safeguarding Scheme on a voluntary basis alongside his core role as a response and patrol officer, with assistance from the force enquiry office staff.

He said: “I am really proud that the scheme has entered its seventh year. While it is never a substitute for good care, it makes it all worthwhile when I hear from the families of people living with dementia that our scheme has provided them with reassurance and support.”

Sgt. King is now looking to extend the scheme further by obtaining funding for GPS pendants for vulnerable individuals.

He added: “There are already a wide variety of GPS-enabled options that may allow a greater degree of independence for people living with dementia. These include some very accurate tracking apps which allow for location sharing and are free to download. These have proved very effective if the person is happy to have a smartphone with them.

“However, for the most at-risk adults living in our communities we hope to be in a position to offer wearable GPS pendants as part of the Dementia Safeguarding Scheme in late 2022.”

In addition to offering the wearable tech, the Dementia Safeguarding Scheme also has a support group on Facebook. We would invite the public to visit to find out more: click here

NHS dementia leads, care homes and dementia support groups can all apply for bulk amounts of the wristbands to be sent out by emailing; stuart.king@avonandsomerset.police.uk.