Leave site
You are here: Home » News » “Very lucky to be alive.” How a driver’s misjudgement in overtaking changed a cyclist’s life forever

Duncan is 42 years old and from Portishead.

In June 2018 he was on his way home from work when his life changed forever.

“I remember waking up in a white room, with bright lights and people all around me. It was strange, I couldn’t hear exactly what they were saying or see their faces. I quickly realised I was in a hospital. But I couldn’t remember how I got there.

“I looked around for a familiar face, my wife, but she wasn’t anywhere to be seen. I needed to call her.  I knew she’d be worrying why I wasn’t home from work. I really needed to let her know that I was ok.

“I looked down to see blood on the sheets and injuries to my knees and arms.  I felt a trickle down the side of my face and realised I was bleeding. I looked around for my bag as I remembered that both my personal and work phones were in there before I set off from work.  A nurse helped me find my bag and my phones, which were luckily still working having survived the impact.

“I went to type in my password but I couldn’t remember the code. My mind was blank, and I got really angry with myself. I probably write this code into my phone about a dozen times a day and I couldn’t even remember the first digit. I was in a lot of pain all over my body and my head was throbbing.  I was exhausted. I felt powerless just thinking about not being able to contact my family.  I lay back on the bed and drifted in and out of consciousness for the next few hours.

“Neither of my phones initially had reception but my wife eventually managed to get through on one of the phones after it gained signal. She spoke with a nurse who reassured her and let her know where I was located in the hospital. Fortunately, my mum was with my wife when she got the news about me being in hospital and was able to look after our young children while a friend drove my wife to hospital.

“I remember the first time my wife saw me, she burst into tears. The nurses hadn’t fully cleaned me up while I awaited x-rays and scans and at that stage the doctors were unsure as to whether I had sustained head or internal injuries. I felt broken and battered, with cuts and grazes across most of my body. I felt like a shell of my former self who had left for work that morning. We hugged and all I could think about was seeing my two lovely young boys again. It was this thought that upset me most. I had no idea how serious my injuries were. My wife told me later she remembered seeing tear marks through blood stains on the side of my face.

“Doctors told me afterwards I was very lucky to be alive. The day I came home from the hospital and first saw my children was very emotional and I held them tightly.” 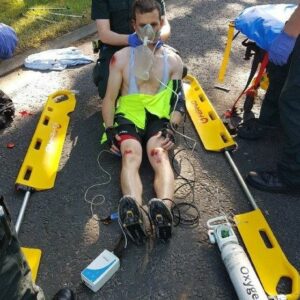 Duncan was cycling home from work along his usual route. It was a warm summer day and the road from Bristol to Portishead was busy with commuter traffic. A car pulled out to overtake Duncan, following the path of the vehicle in front. The driver misjudged the time and space needed to pass safely and was forced to swerve towards the curb to avoid a head on collision. In doing so, the car collided directly with Duncan, who was unprotected and exposed on his push bike. 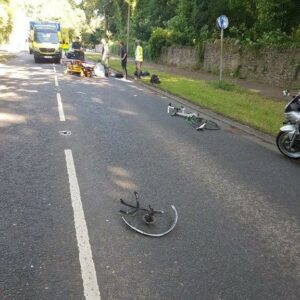 “The first time I saw the remains of my bike I cried.  The realisation hit me hard on how serious my collision was. I kept having flashbacks and it was difficult for me to sleep for several weeks after the accident. Over time my memory came back and I was reminded of the initial violent bang from the impact of being hit by the car and then later being in the road in and out of consciousness with someone trying to move me and later again, paramedics trying to talk to me. That feeling of being frozen would overcome me night after night. 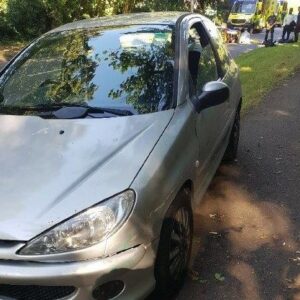 “In the short term I couldn’t  face getting back on a bike and was generally very nervous around fast moving traffic. Because of my injuries I could not drive and had to use public transport. Physically I couldn’t contribute around the house including caring for my two month old and two year old boys. I couldn’t lift, bathe or play with my boys for weeks, which was really difficult for me as a father.  My work was impacted due to the head injury and concussion I sustained and my concentration and memory were affected.

“The longer term effects include various scars on my head, ear, arms and legs. My knee and wrist joints also haven’t fully recovered. I am a lot more anxious and feel really vulnerable around traffic so have stopped riding on certain busy roads. It’s a shame as it has limited my cycling, which is something I’ve been involved with all my life.

“Regardless I feel extremely lucky to still be here for my wife and boys, but feel sick when I think that I could have very easily died as a result of riding my bike home from work.”

The driver appeared in court in December (2018), was given 6 points on his licence and fined £230 plus costs.

PC Purchase was the first officer on the scene, having received a call from an off-duty officer who happened to be in the area when the incident happened.

“I can remember the shift well. It was a really nice day weather wise and it was quite busy.” he said. “When the call came through my first thoughts were how serious the injuries were: any collision involving a car and cyclist is a worry for us. The A369 is a well-known stretch of road, lots of people commuting between Bristol, and at this time of day the roads would be busy.

“When we came off the motorway we were in a lot of queuing traffic and it felt like it took us forever to make our way through it all. First thing I remember seeing was what was left of the push bike – it was broken up into lots of pieces. I became very worried for the cyclist.

“Ambulance were already on the scene and paramedics had moved Duncan out of the road so they could treat him. They were very worried about a potential head injury so I stayed out of the way so they could work on him.

“I spoke with the driver who was, I think, in shock, and I spoke with witnesses who had information on what happened and helped give us an idea of how events had unfolded. Duncan was taken quickly to Southmead hospital for a full check over by doctors and nurses.

“I went to see him in the hospital later that day. He couldn’t remember anything about what happened and was understandably shaken up.

“Luckily Duncan’s injuries weren’t as bad as they could have been.  I remember showing the doctor a photo of what was left of the bike and  he was stunned that Duncan wasn’t left with more serious injuries. My colleague and I responded to another four separate road incidents that day and we both were exhausted by the time we went home, although grateful to be heading home safely to our loved ones.

“There wasn’t really anything else Duncan could have done that day to prevent him  getting caught up in a collision.  He took cycling very seriously and the route was one he took regularly so he was confident in his bike handling skills. Wearing a helmet and high visibility clothing he could be easily seen,  Unfortunately the driver misjudged the time and space they needed to overtake Duncan safely.”

Our advice for road users:

Too Close for Comfort – Close passes are not only very intimidating, but also dangerous:  police attribute “passing too close to the cyclist” as a contributory factor in, staggeringly, a quarter of serious collisions between cyclists and large vehicles.  At the same time, we know that 62 per cent of people in the UK consider cycling on the roads as ‘too dangerous’.  If we want safer roads for cyclists as well as more people cycling, putting an end to close passing is absolutely key.

Top ten tips for cycling in traffic – If you’re one of the millions of people considering riding your bike to work after the COVID pandemic, it’s likely you’ll be riding in traffic.  Here are Cycling UK’s top ten tips that can help you to safely navigate your journey.