They are supporting the Police Unity Tour which starts tomorrow (Friday 26 July) and finishes over the weekend at the National Arboretum in Staffordshire.

The Police Unity Tour cycle ride involves police officers from across the UK cycling from their headquarters to the National Memorial Arboretum. They aim to arrive at the same time for the National Annual Service of Remembrance for fallen officers, which will be attended by chief constable Andy Marsh.

The gutsy trio of cyclists – Sgt Cath Larsen, Sgt Andy Parsons and Inspector Stuart Bell – face a stamina-sapping 166-mile slog from police headquarters at Portishead to the venue in Staffordshire.

It is the first time that a team from Avon and Somerset Police has supported the event.

The trio have been cranking up interest among friends and colleagues as they hope to raise more than £1000 from the own mini “tour de force.”

Each of the riders taking part in the ride will wear a special commemorative bracelet bearing the name of an officer who has died while on duty. These will be presented to the officers’ families at the service. 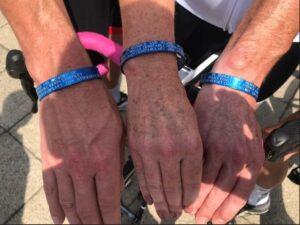 The three officers also hope to visit the family of one of the officers during the ride.

On the first day the three officers will cycle 82 miles to Strensham with a further 62 miles to Birmingham’s NEC on day two. On day three they will link up with colleagues from Wiltshire Police and ride the remaining 22 miles to the National Arboretum.

The ride will have a special poignancy for the three Avon and Somerset officers as it is 20 years ago this year – on May 17 – that traffic officer, PC Steve Jones was killed after being hit by a stolen car being driven by a teenager.

PC Jones had deployed a “stinger” device on the M4 near to the Second Severn Crossing to try to stop the teenager at the wheel of a stolen car.

The driver – who was jailed for four years for causing PC Jones’ death by dangerous driving – swerved at the last moment to avoid the stinger and collided with the 34-year-old police officer.

Tributes flowed in for the brave officer and the then Prime Minister Tony Blair laid a wreath at PC Jones’ grave.

Chief Constable Andy Marsh, who will formally launch the trio on their stamina-sapping cycle run, said: “I wish Cath, Andy and Stuart and safe and enjoyable journey as they raise cash for a worthwhile cause and remember fallen officers, including our very own Steve Jones. We both joined Avon and Somerset on the same day – 7 September 1987. Steve then tragically lost his life 20 years ago.

“The cycling team will face a  tough challenge in warm conditions as they compete in their very own four stage mini Tour de France – facing conditions not dissimilar to those facing riders in France at Le Tour – hot and challenging.”