A veteran Bridgwater beat manager has been awarded the British Empire Medal in the Queen’s Birthday Honours.

PC Tony Freeman – a former commando – who has for the past 14 years been supporting the community in Bridgwater has spent the whole of his 17-year career in policing in the same town in West Somerset.

Prior to joining the police, Tony, who is known as Tex, spent more than 12 years as a Royal Marine Commando.

He worked on the G8 summit – the annual meeting between leaders from eight of the most powerful countries in the world – when it was held in County Fermanagh in 2013. He was among a contingency of police officers who travelled to Northern Ireland to support the policing operation.

Tony also supported Avon and Somerset Police’s response to the disorder in Bristol in 2011 and received a Gold Commander’s commendation for his work during the Somerset Levels flooding emergency response in 2014.

He has also supported the force’s response to policing football matches, serving as a ‘spotter’ at matches involving Yeovil Town.

But it is in the local Bridgwater community, where Tony believes he has achieved most during his police career.

He raised the £12,000 for the West Street Garden Project from various funding applications and completed the project to transform a run-down area into an attractive eye-catching community garden. He also raised the £16,000 from the police and local authorities to enable the installation of the West Street CCTV Camera. 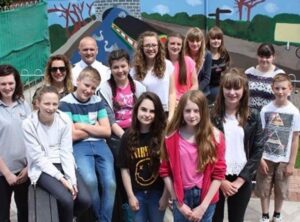 Outside his police work he has been a dedicated supporter of local charities and projects in Taunton and surrounding area. He has raised £23,000 for various charities, including completing four London Marathons, as well as three 100 mile Olympic cycle rides (Ride London 100).

He is currently approaching the two thirds mark in his bid to complete 22 press-ups each day over a 12-month period, which is posted on social media, to raise awareness of PTSD with money raised going to Combat Stress

Additionally, he has supported numerous other local projects, including the completion of a new MUGA and revamped tennis court on behalf of the parish council in his village , as well as supporting local football clubs as a Coaches Liaison Officer/ Coach.

Tony is married and he and wife Donna have two teenage boys aged 13 and 17 years.

Although he has little free time with his day job and on-going community work, he enjoys watching football and motorcycle racing.

Tony said: “I am overwhelmed and extremely humbled and honoured by this award, I would like to thank everyone who has helped and supported me in my projects or has donated to any of my charity events.”

Chief Constable Andy Marsh said: “I am thrilled for Tex. He is a wonderful example of a member of the policing family who does so much work to help the local community, where he works.

“He is real-life ‘action man’ having spent more than a decade in the tough and challenging role of a Royal Marine Commando. During his police career he has been involved in many demanding roles to help protect the public including, the emergency response to the flooding on the Somerset Levels and supporting our response to the Bristol disorders.

“Tony also emerged as one of our stars in BBC TV’s popular daytime “Neighbourhood Blues” documentary series, which turned the spotlight on Avon and Somerset Police.

“But rather remarkably he has still found time to dedicate working towards supporting community-based projects, helping to improve the lifestyle and life opportunities of those living in the Bridgwater and surrounding area, as well as burying himself in stamina-sapping fundraising events for local and national charities,” said the Chief Constable.

Police and Crime Commissioner Sue Mountstevens said: “This well-deserved British Empire Medal just shows how much Tex means to his community and is testament to his excellent local policing, fundraising and community work. I know from speaking to residents that Tony is making a difference every day because they tell me. To serve both his country and his community with such passion, commitment and enthusiasm is a real accomplishment. There are not enough people like Tony in the world and I am delighted that he has been recognised, it is truly deserved.”