In a week when the scale and threat from serious organised crime has dominated the news, a special awards ceremony held by Avon and Somerset Police has recognised officers from the South West Regional Organised Crime Unit for two outstanding investigations that successfully brought down criminal gangs causing huge harm in Bristol and South Gloucestershire.

Also recognised were an officer who has worked tirelessly to help colleagues better understand autism, as well as the team who helped to secure the conviction of a woman who threw acid over her partner.

Police staff and members of the public were honoured for their dedication, bravery and tenacity at the awards ceremony in Clevedon Hall yesterday (Thursday, May 16).

Recipients were presented with awards in front of their friends and family, which was attended by the Chief Constable Andy Marsh, Avon and Somerset Police and Crime Commissioner Sue Mountstevens, and The High Sheriff of Somerset Johnnie Halliday.

Chief Constable Andy Marsh said: “I’ve been to a number of these awards ceremonies over the years and they never fail to inspire me, in fact they are what gets me out of bed in the morning. It’s a privilege to be here, on a sunny afternoon in beautiful Clevedon Hall, to recognise the brilliant and remarkable men and women who work so hard to keep us all safe.

“This afternoon we have heard about some very serious incidents and investigations, involving murder, knife crime, drug dealing, and child exploitation. These cases offer a window into the world of policing in 2019.

“Policing happens because of dedication and commitment, it doesn’t happen because we get paid a lot of money, but because we have a vocation. It also happens because we have families who love and support us, who wrap their love around us so that we can continue to go into work each day, often missing family events and milestones, in order to protect the public. So today is also about saying thank you to them. Never give up.”

Police and Crime Commissioner Sue Mountstevens said: “The thread running through today is one of sheer tenacity and determination. Your role in protecting the most vulnerable in our society, or running towards danger when most people would run away, is what stands out.

“What also stands out is your attention to detail – one man’s bureaucracy is another man’s evidence. That ability to drill down and keep following the evidence is the key to securing convictions and getting justice for victims.

“Being here today and listening has been an absolute privilege so thank you from me and from your communities.”

Award winners were as follows:

Awarded by the crown court for significant personal courage or significant commitment in the execution of duty, above and beyond what should normally be expected.

Detective Inspector Paul Catton, criminal analyst Emma Bajwan and a detective (who can’t be named due to the nature of his work) were presented with Crown Court Commendations for their work to convict eight men for commercial scale drugs conspiracies that saw £305k worth of drugs and nearly £200k in cash seized from South Bristol, the West Midlands and Reading.  The men, led by Bristol man Jimmy Hicks, were sentenced to a combined total of 57 years in prison and the SW ROCU is now working to identify and confiscate cash and assets funded through their crimes. 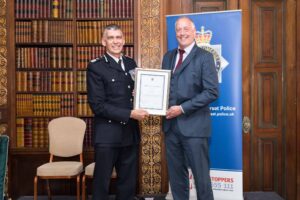 Led by DI Paul Catton, a team of officers from the SW ROCU were awarded Crown Court Commendations for a complex and challenging investigation into an organised crime group – led by South Gloucestershire man Andy Baker – that sought to supply cocaine and ecstasy to Bristol. Ten men were jailed and more than £500k worth of drugs destined for the city’s streets seized.

A Crown Court Commendation was awarded to PC Kelham Shearin who helped to chase down and stop armed county lines drug dealers from London, after they had murdered one of their rivals and seriously assaulted others at a flat in Redcliffe, Bristol using machetes, tasers and knives last June.

Mr Justice Warby commended PC Shearing for his bravery in chasing the offenders and going head to head with them whilst they were still carrying weapons.

DC Wayne Sumsion who was the officer in the case (OIC) was also awarded a Crown Court Commendation for his tireless work to ensure all vital evidence was secured and preserved so that the offenders could be swiftly brought to justice. Mr Justice Warby commended DC Sumsion for his meticulous preparation of the evidence and leadership in bringing the case to court in such an efficient and timely way.

For significant personal courage or significant initiative and/or commitment in the execution of duty far and beyond what should normally be expected. 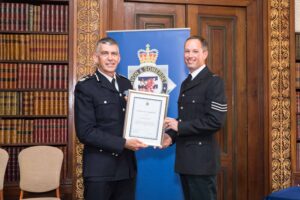 Sergeant Adam O’Loughlin was awarded a Chief Constable’s Commendation for his work in developing understanding and learning within Avon and Somerset Constabulary about autism. His approach to raising awareness of this issue has been innovative and ground breaking, focussing on helping colleagues to better understand autism as well as improving the organisation’s service delivery for staff whose work puts them in contact with members of our community who are autistic.

Adam’s work embodies the Constabulary’s ethos of ‘Serve, Protect, Respect’. He undertakes this additional work mainly in his own time and is passionate about promoting a better appreciation of diversity. Adam is a role model in championing diversity and is regarded as an ambassador for promoting a better understanding of autism in the police service.

In May 2018, a woman was sentenced to life imprisonment at Bristol Crown Court, after being convicted of throwing acid over her partner’s face and body, setting in place a chain of tragic events that eventually led to his death.

Operation Banff was a complex investigation taking over two and a half years to complete. The complexities required great care and dedication when assessing the significant quantity of material collated. The investigation also involved retrieval of evidence and enquiries in both Belgium and Holland.

Throughout the investigation, the actions of DI Paul Catton, DS Stuart Bale, and an analyst in their team went above and beyond that usually expected, to carefully evaluate information, secure evidence and advise the CPS, and in service to the court in their roles of investigators. For this they were awarded a Chief Constable’s Commendation. 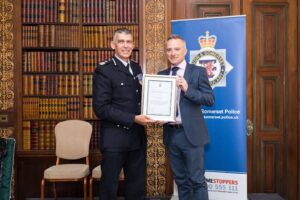 In December 2017, a man was stabbed to death on the dance floor of a nightclub in Bristol. In July 2018, two men were convicted of the murder and received a combined prison sentence of 48 years.

Detective Chief Inspector Jay Riccio who led the investigation, Detective Sergeant Stuart Bale and another detective constable who can’t be named due to the nature of their work, all received Chief Constable’s Commendations for their dedication, attention to detail, leadership and sensitive handling of the case.

A national award for acts of bravery while saving human life, or in attempt to do so 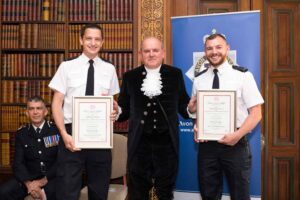 In April 2018, PC Emyr Watson and PC Steven Dexter were called to a concern for welfare incident in a park. When the officers arrived at the scene, they discovered that a man had attempted to take his life and had been found by his partner who was visibly distressed and shocked.

PC Watson, helped by a student nurse present at the scene, began to administer CPR, until PC Dexter and the paramedics arrived to assist. PC Watson and PC Dexter worked as a team, taking it in turns to complete chest compressions for twenty minutes whilst the medical team worked around them. Despite their efforts, the man was sadly pronounced deceased by the doctor present at the scene.

The doctor personally thanked PC Watson and PC Dexter for their efforts and commended them on their CPR, stating that their skills were “outstanding and an immense help”.

For their efforts, PC Watson and PC Dexter were awarded with a Royal Humane Society’s Certificate of Commendation.

In March 2018, police were looking for a vulnerable woman who had gone missing. Whilst the search was on-going the woman was seen by members of the public behaving in a dangerous manner by a bridge.

Whilst police made their way to the scene, a member of the public, Samantha Ledger, helped the woman, keeping hold of her and staying with her until police arrived.

Samantha showed a high level of initiative, determination and courage in saving the woman’s life. If it was not for her actions, there is little doubt that the woman could have lost her life. For these brave and decisive lifesaving actions, Samantha was awarded with Royal Humane Society’s Certificates of Commendation.